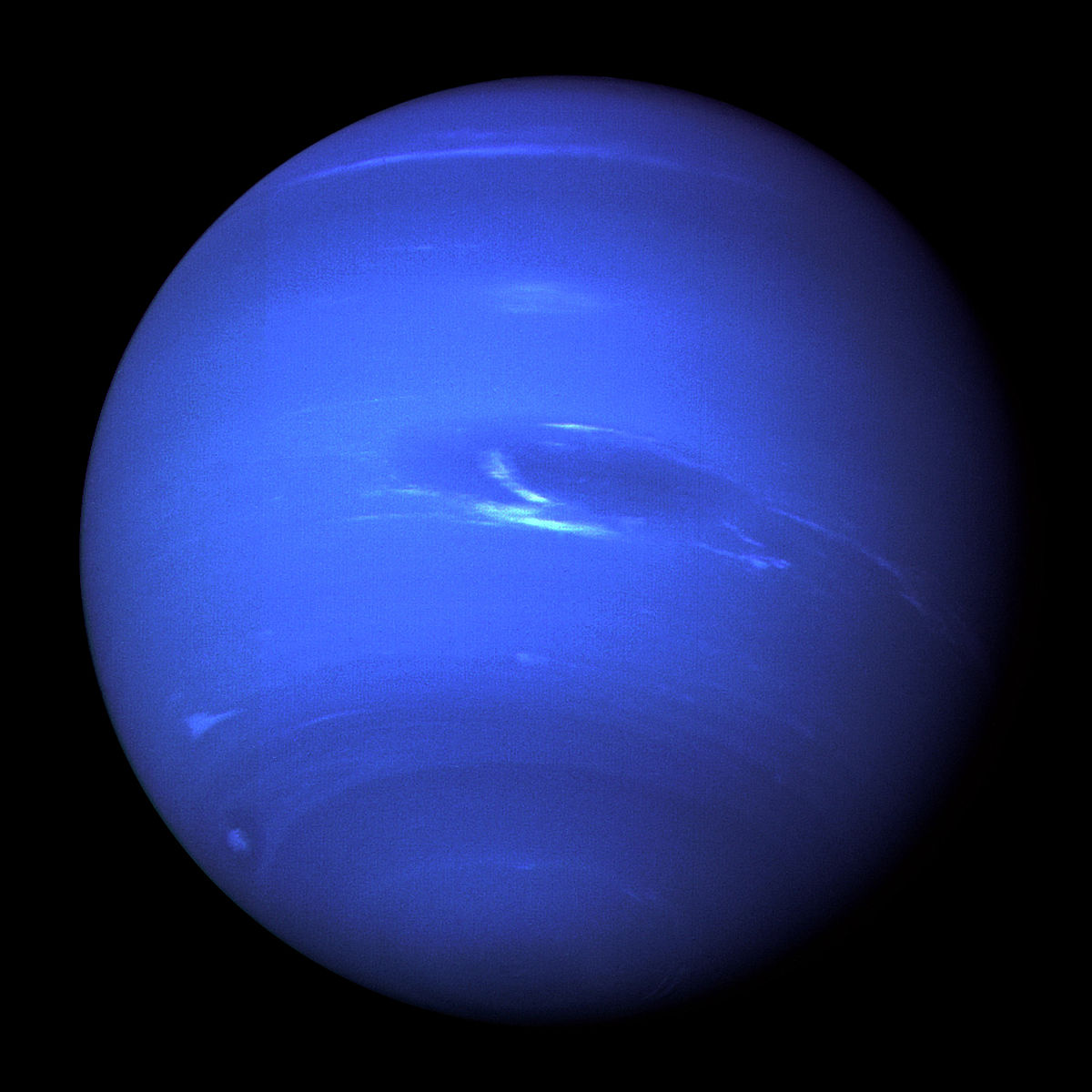 Neptune is not readily visible to the naked eye. Neptune was discovered by mathematical deduction, very much like the recent revelation of the existence of ‘Planet 9’, which astronomers are currently searching for as the explanation for all those uniformly tilted orbits of the 5D Kuiper Belt objects. Recently, modern technology has given us much clearer views of the planet that was originally so ‘hard to see’. When the Voyager 2 flew by Neptune on August 25, 1989 it changed our capacity for working with this archetype forever.

We learned that Neptune's atmosphere has active and visible weather patterns, which are driven by the strongest sustained winds of any planet. Because of its great distance from the Sun, Neptune's outer atmosphere is one of the coldest places in the Solar System.

Neptune has 14 known moons, which are named for minor water deities in Greek mythology. By far the largest Moon is Triton, discovered by William Lassell on October 10, 1846, 17 days after the discovery of Neptune itself. Over a century passed before the discovery of the second natural satellite, Nereid. Neptune's outermost moon Neso, which has an orbital period of about 26 years, orbits further from its planet than any other moon in the Solar System.

As the current outermost planet in our inner solar system, Neptune represents the current furthest reaches of our conscious Self-awareness. According to Wikipedia, Neptune is the fourth-largest planet by diameter, the third-most-massive planet, and the densest giant planet. It is 17 times the mass of Earth and is slightly more massive than its near-twin Uranus, which is 15 times the mass of Earth and slightly larger than Neptune. Neptune orbits the Sun once every 164.8 years. It is named after the Roman god of the sea and has the astrological symbol ♆, a stylised version of the god Neptune's trident.

Uranus and Neptune are the two inner outer planets. They reflect our individual and collective journey to the higher Self, representing the awakening consciousness and the capacity for enlightenment respectively. Neptune has the capacity to lift veils and illuminate what Uranus reveals.

Neptune delivers us to those overwhelming, larger than life passages that cause us to grapple with confusion, escapism, delusion and deception, but that ultimately lead to crystal clear understanding, conscious awareness and compassion.

While Neptune represents the process of enlightenment it can also just as easily deliver us to confusion. We can be utterly disillusioned when we’re not ready to Self-realize, because the structure and density of the world we have created has to dissolve in order to deliver us to the void. We must be in the place where we don’t know what’s real and true, and we must surrender to the void of ‘no-thing’ and learn how to bring our faith to the experience. Only then can we begin to see what is True: to “see the Light”.

When Neptune first shows up, we tend to look through rose colored glasses in an unconscious effort to deny what is True in our life. Escapism is often the choice we make when Neptune transits, and denial can produce some very long term detours. There are many 3D ways to attempt to escape our reality, but the true Neptunian journey begins only when we wake up and fully realize that we have been dreaming we can actually escape at all.

Once we have made the choice to take the path to the Higher Self, Neptune delivers an experience that is very much a tunnel-like passage.This generates a two year chapter in our life where all that we once believed was real tends to disappear, and everything that was once defined loses its substance. We feel we are left to walk alone through a long, dark stretch, without knowing what has happened. We take this journey, because there is no way to go backwards once we are on the path to higher consciousness, and along the way we learn all about faith and trust. About half way through the tunnel we may realize that we have begun to See. That’s due to the Light that comes directly from the heart, which opens as we learn to trust our Selves on the journey.

At some point the ‘Light at the end of the tunnel’ appears. By this time we have learned that there is no rushing this passage, and that we will reach the end of the tunnel when we get there. It is this emergence from the tunnel that is the culminating point of the entire Neptunian experience. As we enter the world again, we find it is nothing like the world we left behind and we ultimately realize that it reflects the new consciousness we have acquired along the way. This is true enlightenment… We come to realize that we all have this capacity, and our trust in our Self and Source deepens. Neptune is the universal force that provides the means to enlightenment.

The Neptune journey is a major process. It happens when Neptune transits an important personal planet in the birth chart. And that is something that only happens once in a lifetime, once every 165 years, IF you have signed up for that journey.

Neptune is mythologically the king of the ocean. Astrologically, he has domain over that entire limitless realm. The ocean is the larger part of the Divine Feminine Gaia. Once we have attuned our higher Self to Neptune’s vibration, we are able to work with this archetype to access the part of the Divine Feminine that has been lost to us for so long. The Divine Feminine is being restored from centuries of a shattered existence in the water that covers the planet. That water represents all the emotion and consciousness held on the Earth. Once we embrace the powerful energies the ocean has contained all along, we are free to work with the higher dimensional frequencies this amazing archetype has to offer.

Neptune’s frequencies are numerous and constantly changing, allowing us to open to its unlimited possibilities. Neptune’s shape shifting and frequency changes are always available to be experienced by us. When we open our hearts to the limitless realm we come to Know what Neptune’s process can do, which is to move us, through incessant flow, dissolution, and a repetitive wave-like motion, to a new inner space, a new shore line.. A new reality.

In the birth chart the Pisces quality of consciousness is disposed by Neptune. It is where we face the unlimited possibilities available to us, and deal with any fears that arise out of not knowing which path to take or where it will lead. It is here where we put faith in action and trust in the wisdom of our Higher Self.