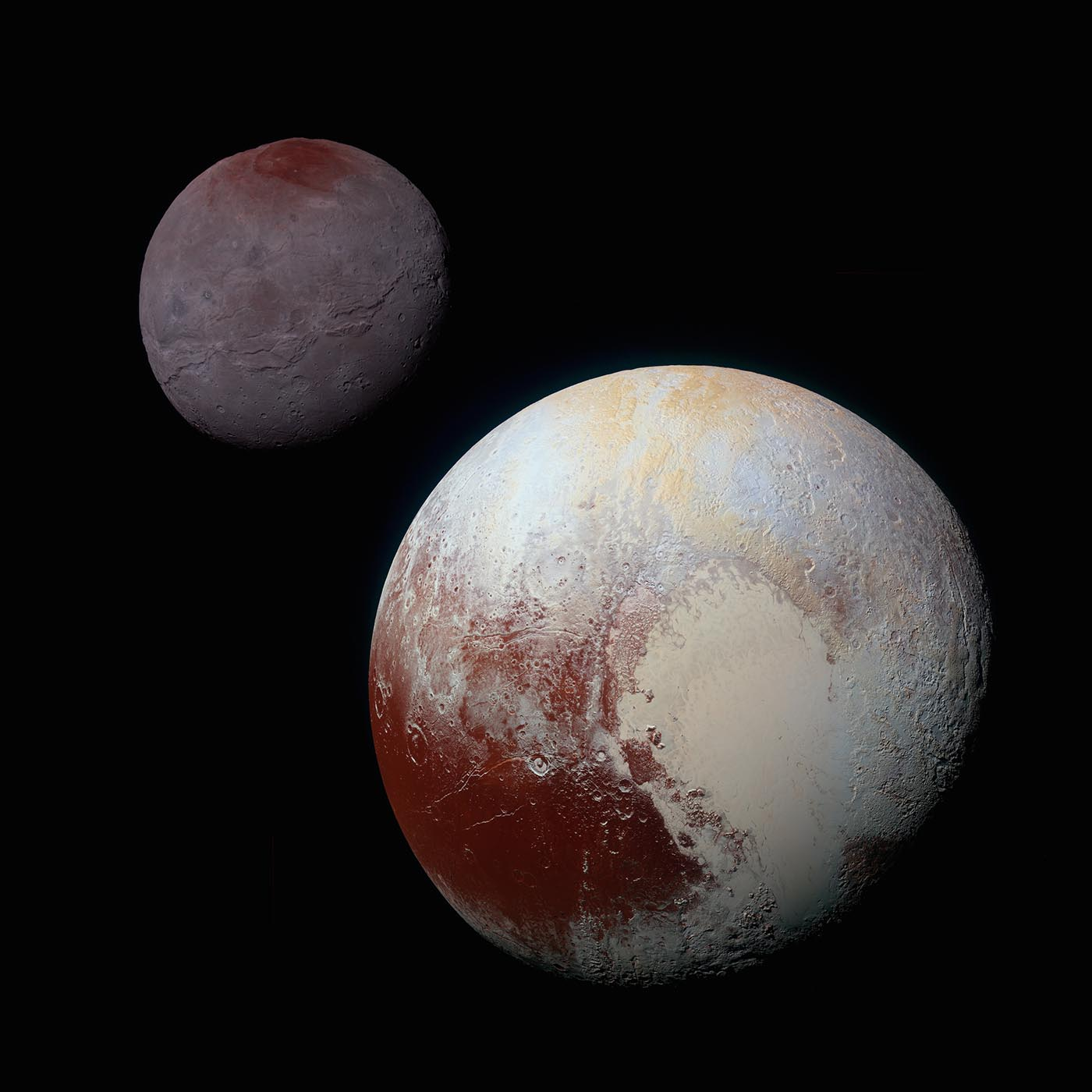 Pluto is a dwarf planet located at the entrance to the Kuiper Belt. The Kuiper belt, also known as the Trans-Neptunian region, is a torus or ring-shaped area in the outer Solar System, extending from the orbit of Neptune to approximately 50 Astronomical Units (AU) from the Sun. (One AU is equal to the distance between the Earth and the Sun.) It is similar to the asteroid belt, in that it contains many celestial objects, but it is far larger—20 times as wide, expanding the solar system by as much, and reflecting the new consciousness that humanity has achieved.

Pluto was discovered by Clyde Tombaugh in 1930 and was originally considered to be the ninth planet from the Sun. When the Kuiper belt’s existence was confirmed in 1992, Pluto’s status as a planet was questioned when several objects of similar size were discovered in the Kuiper belt. In 2005, Eris was the first Kuiper Belt Object to be discovered. This led the International Astronomical Union (IAU) to formally redefine the term "planet" in 2006. That definition demoted Pluto from planet status and reclassified it as a dwarf planet along with Eris. At that point it was realized that Pluto spends some of its orbit inside the Kuiper Belt, making it the archetype that delivers us to that region of our consciousness. The Kuiper Belt houses almost all the 5D planets. These 5D planets, beginning with Pluto, represent the archetypes of the higher Mind. We require a different consciousness to access them.

When Pluto was ’demoted’, he was collectively made to go through his own metamorphosis, and now that he has done so, it is no longer necessary to perceive him as the ‘Lord of the Underworld.’ He can now be seen as the gatekeeper to a whole new realm of archetypes just like him located in the Kuiper belt, beyond his orbit. Each of these ‘dwarf planets’ offers another dimension of universal potential that was not previously realized.

Pluto has a moderately eccentric and inclined orbit which ranges from between 30 to 49 AU from the Sun. This means that Pluto periodically comes closer to the Sun than Neptune, but gravitational pull prevents them from colliding. In Centaur-like fashion, Pluto’s orbit connects Neptune (and our entire ‘inner’ solar system) with the Kuiper Belt. In this way, Pluto can be recognized as the Gatekeeper to the New Consciousness.

Pluto has four known moons: Styx, Nix, Kerberos, and Hydra. It was once believed to have five Moons, including a large body named Charon, but upon closer inspection, courtesy of New Horizons spacecraft, it has become clear that the Pluto–Charon system is a very rare planetary arrangement in our Solar System. The similarity in size of Charon and Pluto has prompted some to call it a double dwarf planet, or binary system. Pluto-Charon is also unusual among planetary systems in that each planet is tidally locked to the other, which means that Pluto and Charon always have the same hemisphere facing each other. They revolve like a dumbell, end over end. Where the Moon is tidally locked to the Earth and orbits around it, Pluto and Charon are tidally locked to each other and orbit each other. This also means that the rotation period of Pluto and Charon are equal to each other, and they take exactly the same amount of time to orbit the Sun. As Pluto and Charon are both male archetypes, they begin to give new meaning to duality. This makes sense, as the new consciousness transcends all duality.

On July 14, 2015, the New Horizons spacecraft gave us our first real look at Pluto when it flew by the planet. The heart we observe on Pluto is an extremely important reminder to place our conscious awareness on Love and everything that Venus represents. Basically, the Gatekeeper reveals that the password to cross the bridge to the invisible realm is LOVE.

Do you recognize what the invisible realm is? We have called it the underworld for centuries, and conjured up a lot of negativity to go along with it. None of that is Truth. The invisible realm is our home. It is where we are when we are not in physical form experiencing separation consciousness. It is our natural environment, and now that we recognize it, we are ready to be physically recalibrated so that our physical frequency is aligned with our capacity to move freely through that world and back again.

Pluto/Charon represents the part of us that gains access to the higher realms through the process of resurrection. We no longer have to leave our bodies to undertake a resurrection. Pluto is the archetype that delivers the soul to wisdom after going through profound experiences. In the birthchart the Scorpio quality of consciousness is disposed by Pluto/Charon.

Pluto can be tough on us; we can tend to feel victimized or abused, or in a power play with someone or something that tends to baffle us or make us feel small. It is vital to realize now that each of us is the abused, the abuser and the savior, and that all of those roles are just parts of the experience of Self-Empowerment. When we perceive anything or anyone 'out there' to be playing any of those roles in our life, it is essential to recognize the part of us that acts that way toward our Self. This is how the Self reclaims its WHOLE-ness, and the separation of consciousness that is inherent in these emotionally over the top experiences is transmuted.

The energies of Pluto include a lifting out of the ashes into a new consciousness, a new empowerment. Pluto is a force that is more connected to the Universe than to our personal drive, and so it often causes us to have to let go and surrender to its power in order to experience our own. Understanding the finite condition of our personal power also allows us to grasp the enormity of the Universal powers that permeate our soul’s journey.

Pluto’s Transit to the Natal Chart

Self-definition at the personal-power level makes for the capacity to experience a total metamorphosis of Self. A Pluto transit is a once in a lifetime occurrence that is often compared to a trip to Hell and back again. It changes the life and the very fabric of our being forever. The more consciously we surrender to Pluto's energies, the more personal power we will have access to in the end.

The Great Rebirther invariably takes us to the place where we must let go and surrender to a higher power in order to experience our own personal power. We experience an overwhelming force that is way beyond our control and causes a loss, change or new beginning. The Pluto experience makes us feel that something happens TO us, and we have no choice but to accept it and go on. This is the universal force of death, rebirth and metamorphosis. Because death is a physical experience and does not exist beyond the physical realm, Pluto is the gatekeeper to the next greater realm of consciousness.

Pluto has a 248 year orbit, and when it transits any planet or point in the birth chart, it is a once in a lifetime experience. This transit does not always happen, and when it does, it is because the soul has chosen this experience before its arrival in physical form. A Pluto transits takes 2-3 years and always, without exception, changes the life. Its arrival at a personal planet is unmistakable, and when Pluto/Charon is transiting it can seem as though nothing else is going on. This experience looms large and takes over one’s life. It produces a loss of some kind, and the need to learn to let go of whatever is lost, usually a person, place or thing that the soul has long been attached to or considered essential in some way. The process of letting go, (sometimes experienced as grieving) takes the longest portion of the transit. Once this is accomplished, a rebirth or resurrection begins. During this final stage of a Pluto/Charon transit something new emerges that replaces the original loss and brings the life into a far more evolved experience of Self-empowerment.

A Pluto/Charon transit is very much like the transporter beam on the USS Enterprise. It locks you into its transformational grip, puts your being into total disarray, and transports you to an entirely new location, where you slowly but surely come back together. The point is, though, that transporter beam is set to move you to a set of coordinates that you your Self set up. In the biggest picture, there is nothing ‘unknown’ about the transit, but at the most personal level, this can feel like the most alien experience you’ve ever had.

At this writing, March 2019, Pluto is headed for a return to his location in the birth chart of the United States. That means that everything this country is founded upon is about to undergo a major resurrection. Again, resurrection means loss of what has been, letting go of what has been and embracing the new that emerges out of that chaos.