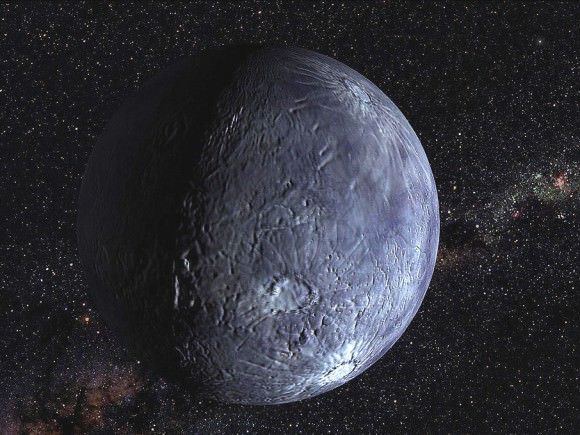 By Stephanie Azaria with Shelly Leal

Quaoar is a dwarf planet that was discovered on June 4, 2002. It is located in the Kuiper Belt and it has an orbit of 287.5 years. The Kuiper Belt object Eris was discovered in 2005 and it was her discovery that led astronomers to create the new classification ‘dwarf planet’. Quaoar was added to this category, along with Pluto and Ceres. It is an interesting fact that Quaoar was discovered before Eris (who is also known as The Great Disruptor), but not classified until Eris took her place. Eris is one of the two Great Awakeners, and as such it makes sense that her archetype is a pioneering spirit in the human story.

“Consistent with the IAU conventions for naming Kuiper Belt Objects after creator deities, the object was given the name Quaoar after the Tongva creator god. The Tongva people (otherwise known as the Mission Indians) are native to the area around Los Angeles, where the discovery of Quaoar was made.” (universetoday.com)

Quaoar is a multidimensional archetype that represents the awakened place within us where all thought originates. Quaoar’s presence provides us with the capacity to think new thoughts, and therefore to create a new world. As we become aware of the power of our thoughts, we can create the world in a whole new way, by persistently infusing our thoughts with Love.

In order to allow new thought to emerge from our consciousness, we must be willing to let go of all the limiting paradigms, ideas, beliefs and attitudes that our old thinking has spawned. We must open our hearts and infuse Love into our minds. When we do this, we eventually surrender to the awareness that we cannot Know what we have not yet experienced, and that we don’t truly understand anything that we have habitually believed in. Letting go of our old mindset allows us to have a new experience, uncolored by old thought-forms, and ultimately to access new realizations.

Quaoar has been transiting at or near the Galactic Center since 2014. This black hole at the center of our Milky Way Galaxy is the frequency of Source Itself. Source IS the energy of Love. As we are witnessing, Quaoar on the Galactic Center is mirroring the changes to our old belief systems that are just now beginning to make themselves known. These changes are irrevocable and inevitable. Quaoar is the 5D octave of Mercury. As our mental operating systems recalibrate with these new Source frequencies, Quaoar serves to represent this higher consciousness as entirely new thoughts and concepts. In the Fifth Dimension Love is Everything: It is the Thought behind thought.